Get me outta here!

On the 22nd April it was Earth Day and this years theme was the Face of Climate Change.  Climate change is impacting peoples lives globally, with the severest impacts affecting people living in poverty.  Increased famine, flooding, storm activity and intensity are only going to continue unless efforts are taken to reduce our greenhouse gas emissions.

Greenhouse gases, such as carbon dioxide have an insulating affect around the earth, trapping in long-wave radiation from the sun which results in the warming of the earth.  This greenhouse effect is an essential mechanism that allows life on earth because without it, the earth would be too cold to support life.  However, the increased production of greenhouse gases combined with changes in land use are resulting in rapid warming of the land and ocean; Climate Change.

The Earth’s mean surface temperature has increased by 0.8 °C (1.4 °F) since the early 20th century, with about two-thirds of the increase occurring since 1980. Future predictions vary depending on different greenhouse gas emission scenarios but even under the lower modeled emission scenario the global temperature is still predicted to increase. 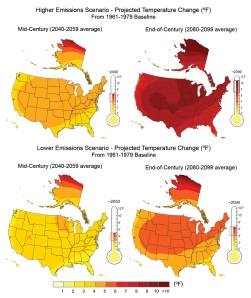 The impacts of climate change are vast, including social economic and biological effects.  According to the Inter-panel on Climate Change the key global projections are:

Increases in storm activity, famine and droughts carry with them a huge economic burden as well as social unrest and the increase in environmental refugees. 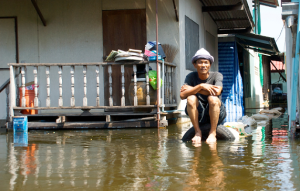 Climate change has many faces.

A man in the Maldives worried about relocating his family as sea levels rise, a farmer in Kansas struggling to make ends meet as prolonged drought ravages the crops, a fisherman on the Niger River whose nets often come up empty, a child in New Jersey who lost her home to a super-storm, a woman in Bangladesh who can’t get fresh water due to more frequent flooding and cyclones

And they’re not only human faces.

They’re the polar bear in the melting arctic, the tiger in India’s threatened mangrove forests, the right whale in plankton-poor parts of the warming North Atlantic, the orangutan in Indonesian forests segmented by more frequent bushfires and droughts

These faces of climate change are multiplying every day.

For many, climate change can often seem remote and hazy a vague and complex problem far off in the distance that our grandchildren may have to solve. But that’s only because they’re still fortunate enough to be insulated from its mounting consequences. Climate change has very real effects on people, animals, and the ecosystems and natural resources on which we all depend. Left unchecked, they’ll spread like wildfire.

Luckily, other faces of climate change are also multiplying every day.

Every person who does his or her part to fix the problem is also a Face of Climate Change: the entrepreneurs who see opportunity in creating the new green economy, the activists who organize community action and awareness campaigns, the engineers who design the clean technology of the future, the public servants who fight for climate change laws and for mitigation efforts, the ordinary people who commit to living sustainably.

The Earth Day Network is still building its global collage and is asking people to send in pictures and stories that show the Faces of Climate Change.  Visit http://www.earthday.org/faceofclimate/about.html to find out more.

The Earth day Network hopes that together, we’ll highlight the solutions and showcase the collective power of individuals taking action across the world. In doing so, we hope to inspire our leaders to act and inspire ourselves to redouble our efforts in the fight against climate change.

On Little Cayman we did our part and conducted a beach clean and held an Earth day talk on the Face of Climate Change where, locals and visitors each committed to reducing their Carbon footprint.

It is not too late to get involved and I would love to hear of your efforts.

Together we can make a difference to the Face of Climate Change!

The latest news on WordPress.com and the WordPress community.